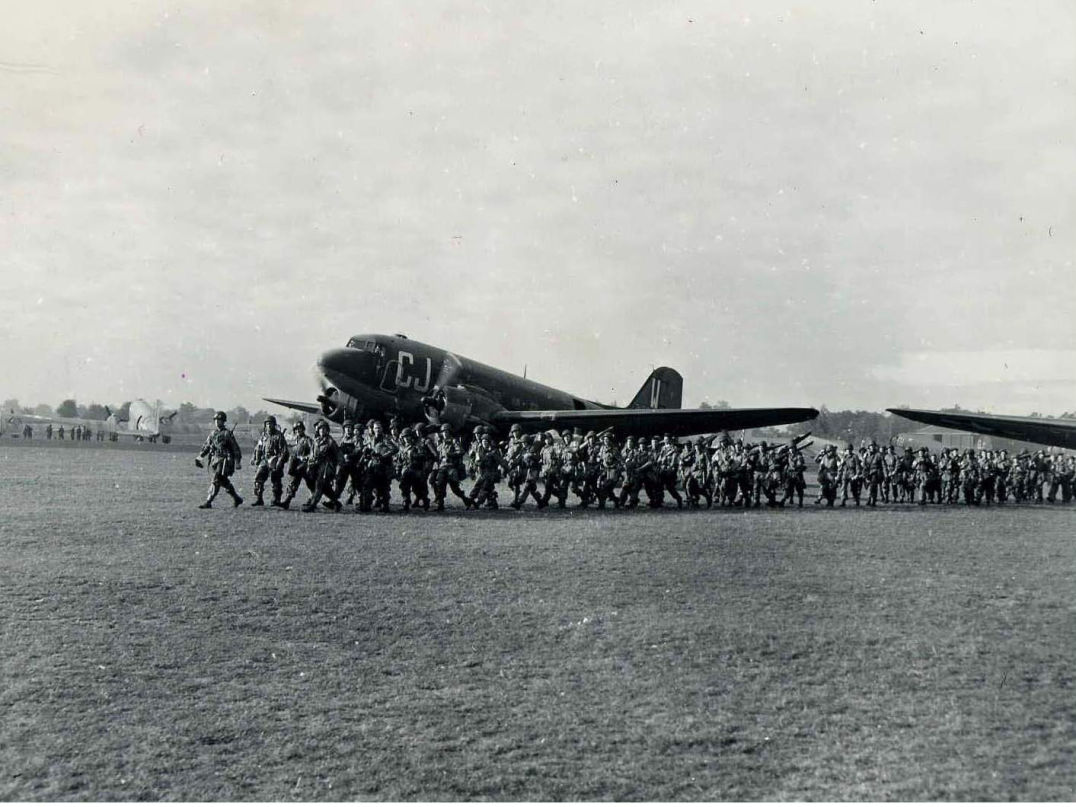 Heading for the planes

Sumday September 17th,  1944
It was a beautiful sunny day in the occupied Netherlands. Like every Sunday, the people of Eerde were together in church to pray for better times. From the reports that came in from Belgium, the parishioners knew that the liberators were not far away.
And when Father Willenborg announced from the pulpit that "something" was going to happen, the people immediately understood what he meant.
Bernard van Dam played the first notes of the Dutch National Anthem from the church organ ........

At that time the paratroopers of the American 101st Airborne Division were already on their way to the Netherlands. As part of Operation Market Garden, the area around Eerde was designated as drop zone for the 2nd and 3rd battalion of the 501st Parachute Infantry Regiment. Together with the 1st battalion, which landed north of Veghel, they had to capture a part of the corridor to Arnhem and keep it open for the advance of the English 30th Corps. 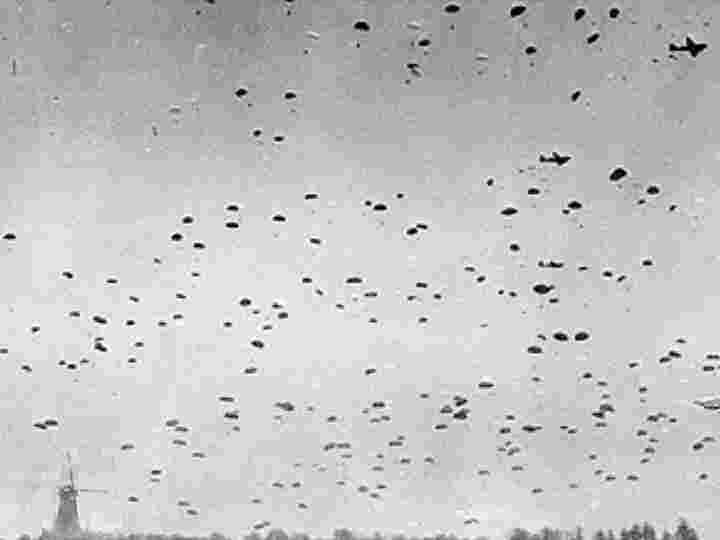 Shortly after noon the first Dakota could be seen approaching Eerde from the south. There were 14 pathfinders on board. They were the first to jump above Eerde as they had to mark the drop zones.
A few minutes later the sky was filled with hundreds of parachutes, with which people and equipment made a soft landing on Eerde's soil. Because there were no Germans in Eerde at that time, the Americans occupied the village within an hour and set up roadblocks.
Many of the paratroopers were young boys, not even 20 years old. They had been terrified along the way being shot at by German anti-aircraft fire. Once they were on solid ground and were hospitably received in Eerde, the war seemed to be going well again. More experienced paratroopers, who had been in the Normandy invasion in June 1944, knew better ........ 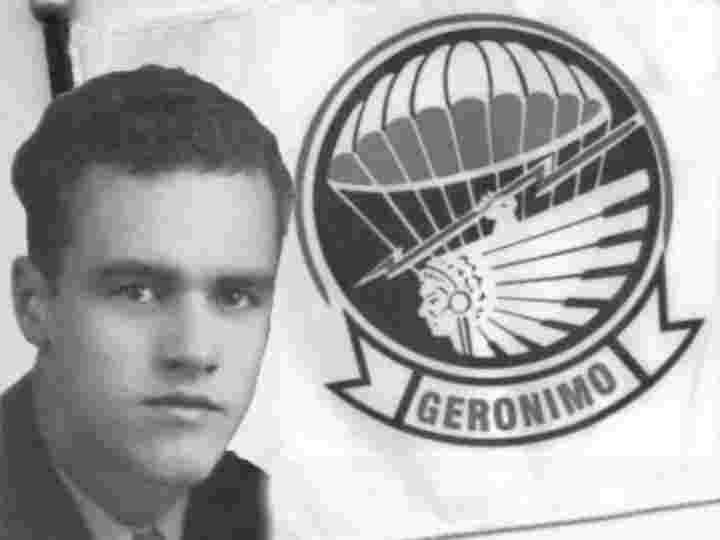 Monday, September 18th, 1944
The Americans had occupied the village of Eerde, but not the sand dunes west of the village. This gave the Germans the opportunity to attack the village from the sand dunes the next day. At the same time, German troops were advancing along the railway from Schijndel to Veghel. There was some fierce fighting in the vicinity of the windmill and the railway station. Initially, the paratroopers were able to repel the attacks, partly because the mill formed an excellent lookout. Sergeant Jacob Wingard, who gave directions for the mortars from the mill, was fatally hit in the chest by a German sniper. He died in the mill. Ultimately it proved impossible for the paratroopers, who only had light weapons, to hold their positions and they withdrew to Veghel. 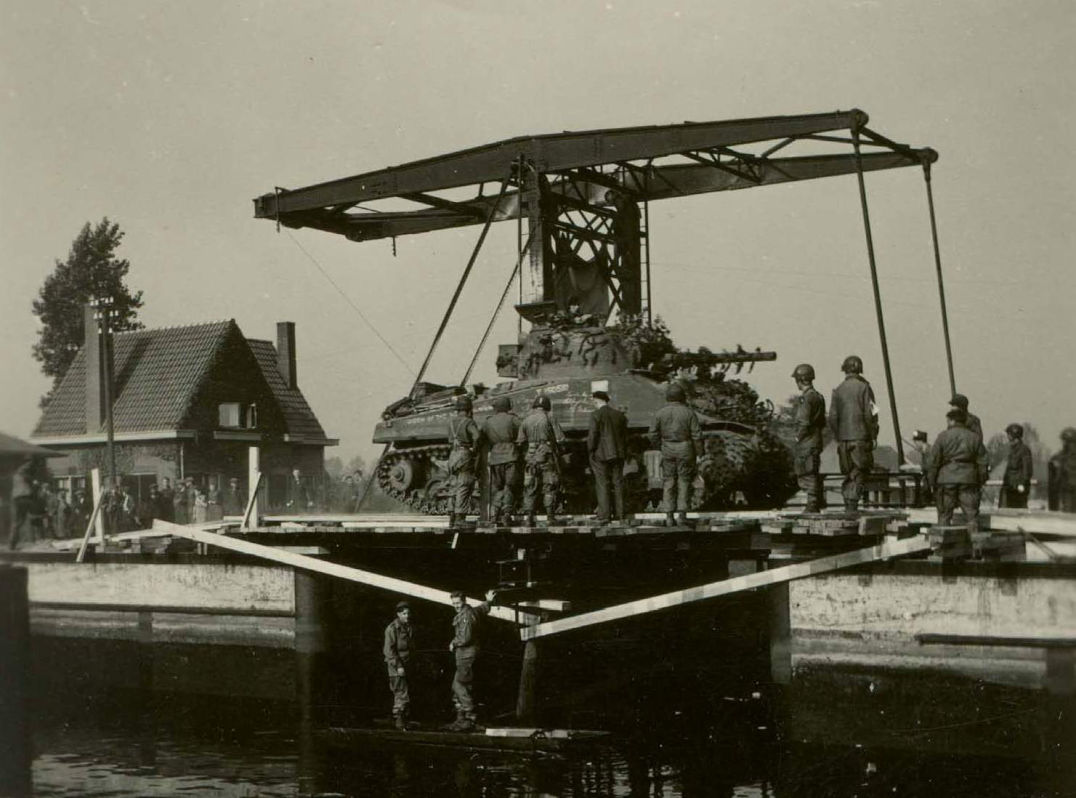 Tuesday September 19th, 1944
In the morning, the first British tanks arrived at the bridge over the Zuid Willemsvaart Canal in Veghel.
The bridge was actually too narrow for the Sherman tanks, but Captain Thomas Norwood's men of the 326th Engineer Battalion built an extra bridge next to the existing one, with the help of Mr. Oomen, teacher of the Veghel craft school.
The Corridor was open, but barely one kilometer away from it were the Germans, who had taken possession of Eerde. Colonel Johnson did not think it wise that the entire regiment was concentrated in Veghel and sent the 3rd battalion to Eerde to push back the Germans. 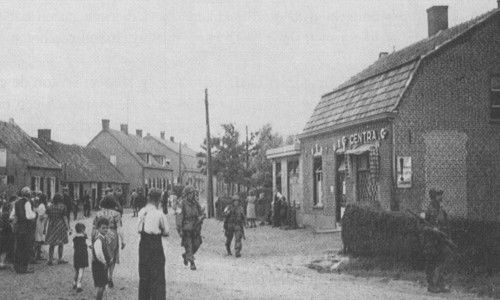 Wednesday September 20th, 1944
Fierce battles were fought to recapture Eerde. Some Sherman tanks of the English 44th Royal Tank Regiment joined the 3rd battalion of the 501st Regiment. One of the tanks was pierced by a German shell under the eyes of Lieutenant Colonel Ewell, killing the crew.
But the American and British soldiers persisted and at the end of the day, Eerde was back in Allied hands. 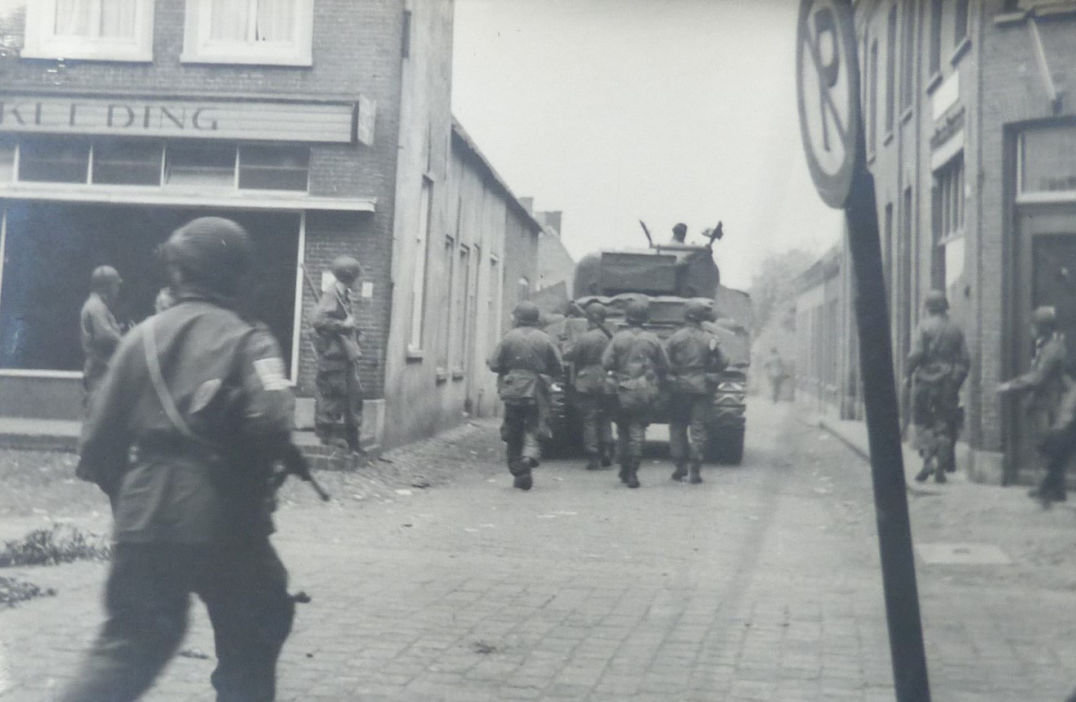 Thursday September 21st, 1944
The Dutch underground had information that the Germans wanted to attack the Corridor from Schijndel. Instead of waiting for this attack, Colonel Johnson decided to surprise the Germans in Schijndel. The 1st battalion, led by Colonel Kinnard, was in Heeswijk at that time, ready to attack Schijndel from the north. Shortly after midnight they reached Schijndel.
The advance of the 3rd Battalion, which had left Eerde at 10 p.m. was less successful. On their way they were repeatedly shot at. Much time was lost in chasing Germans who had hidden themselves in farms. Some paratroopers were taken prisoner by the Germans. 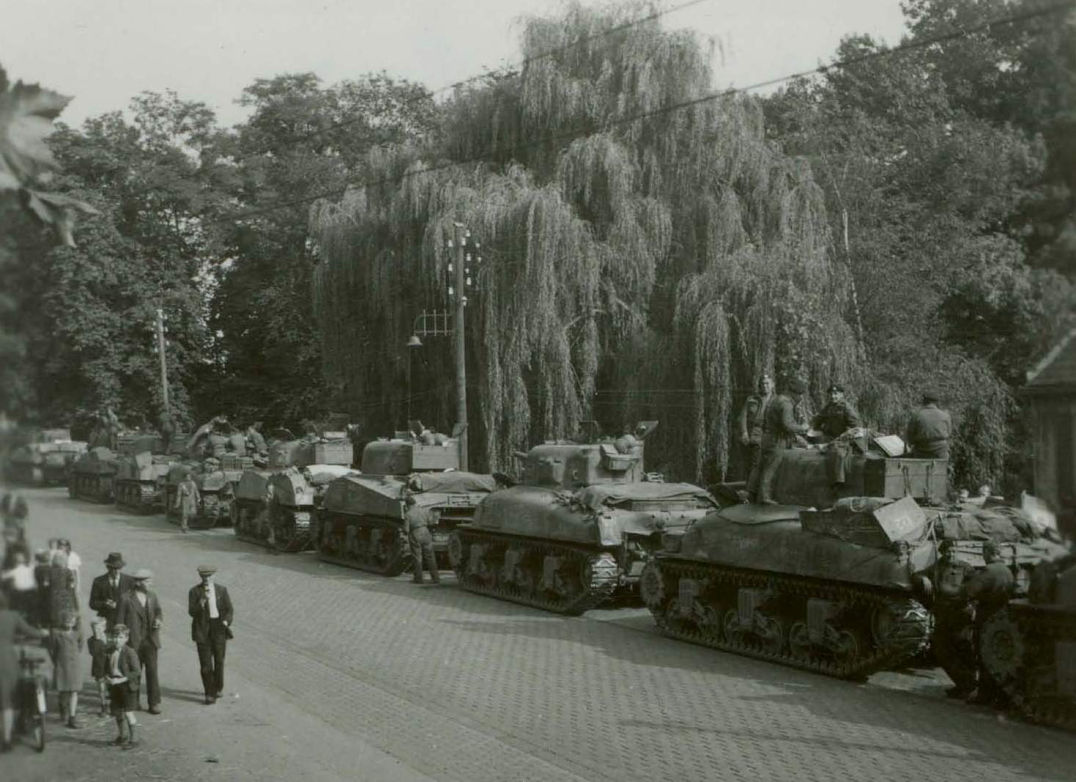 Friday September 22nd, 1944
At dawn, the 3rd battalion reached Schijndel. The Americans got support from 12 British tanks, which had awaited daybreak in Eerde.
The conquest of Schijndel went well, but in the afternoon suddenly the news came that the troops had to return because Veghel was under attack. While the Americans were on their way to Schijndel in the morning, German troops from Wijbosch had taken Eerde again and were threatening the Corridor. The 1st battalion went back to Eerde along the railway, while the 3rd battalion returned to the village from the south via the Coevering. Fierce fighting was needed before the German patrols in Eerde surrendered.
In the meantime, the 2nd battalion, which had remained in Veghel, had its hands full to push back a German attack from the east. 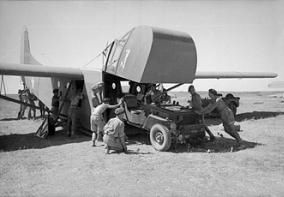 Saturday September 23rd, 1944
In Veghel, the German troops tried all day long to capture the bridges. The 2nd battalion of the 501st Parachute Infantry Regiment, which was defending Veghel, got help from the 506th Parachute Infantry Regiment and the 327th Glider Infantry Regiment. These men had landed on the fields between Sint-Oedenrode and Son in WACO gliders, in which they had brought jeeps and anti-tank guns. The German attack could be repulsed.
It was fairly quiet that day in Eerde. A prisoner of war camp was set up in a field where the primary school now is. 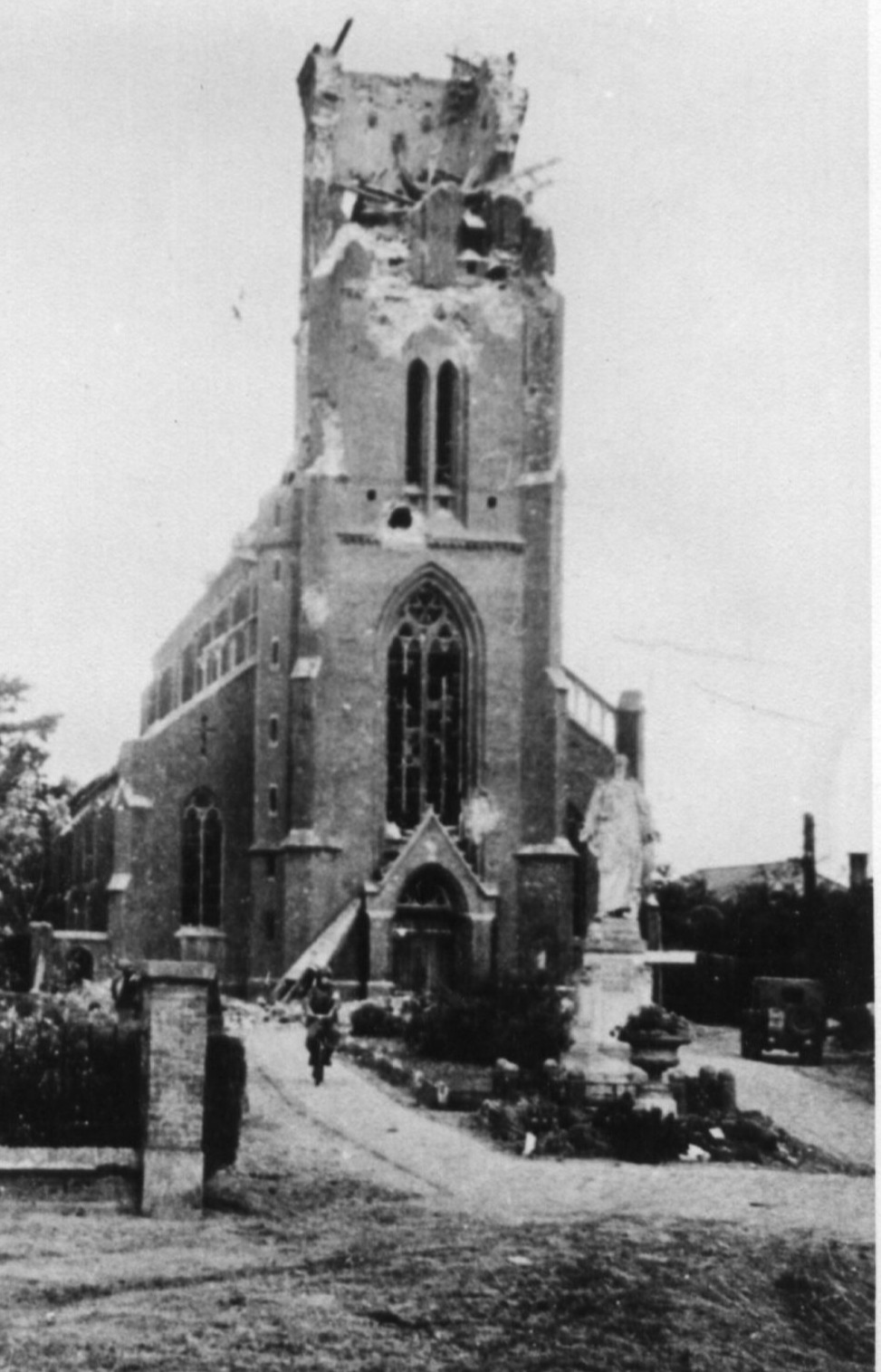 Sunday September 24th, 1944
Because the 327th Glider Infantry Regiment had taken over the positions in Veghel, the 2nd battalion of the 501st Regiment could move to Eerde. They followed  the railway line. At the railway bridge over the canal they were shot at by the Germans with 88 mm guns. Many men were killed or wounded.
The 907th Glider Field Artillery Battalion, which had landed with gliders the day before, came to support the 501st Regiment in Eerde with their 105mm howitzers. They were just in time, because that day the Germans attacked on several fronts. The Fallschirmjäger Regiment of Von der Heydte attacked Eerde from the sand dunes with about 200 men and a number of tanks. The Americans charged them with unimaginable courage. This fight would become famous as the "Battle of the sand dunes". Bullets and grenades flew through the village. The church and the windmill were badly damaged. A truck with ammunition exploded after a direct hit from a German tank grenade, killing and wounding many Americans. 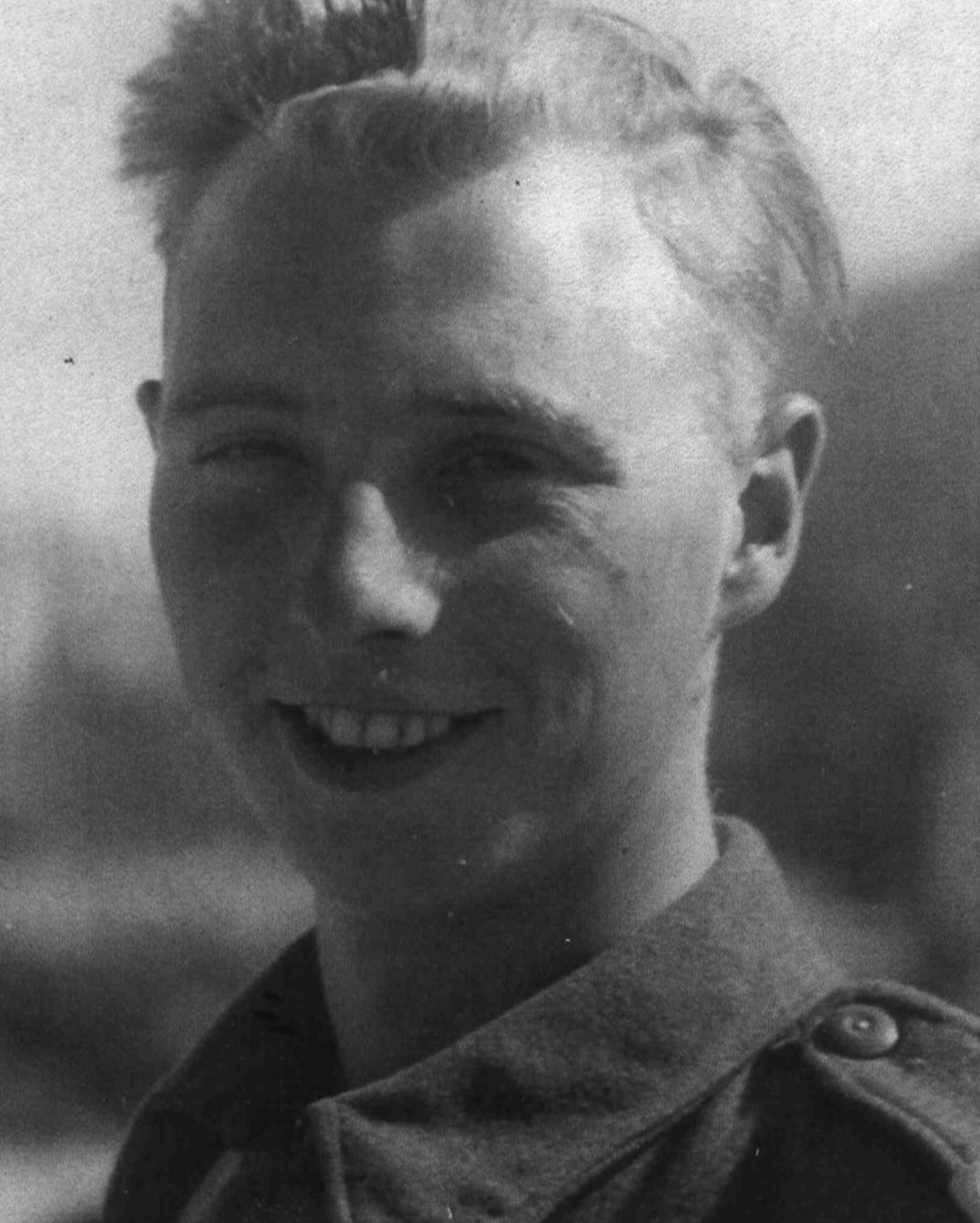 British tanks of the 44th Royal Tank Regiment had arrived in Eerde. Even before they could take positions, three of them were destroyed by German shellfire, killing most of the crew horribly.
The English refused to send any more tanks before the Germans were chased from the sand dunes. After fierce fighting, in which the Americans attacked the Germans with true heroism, the sand dunes were cleared.
While Von der Heydte's Regiment attacked the village of Eerde, Major Jungwirth's battalion moved through the Coevering to the Corridor, where they managed to cut it off. The Germans took up positions in the hamlet of Logtenburg. This, after all the previous delays, was disastrous for Operation Market Garden, especially for the British troops in Arnhem who were in desperate need of reinforcements.

Learn more about the life of Gilbert Astin, driver of the tank that was destroyed at the windmill. 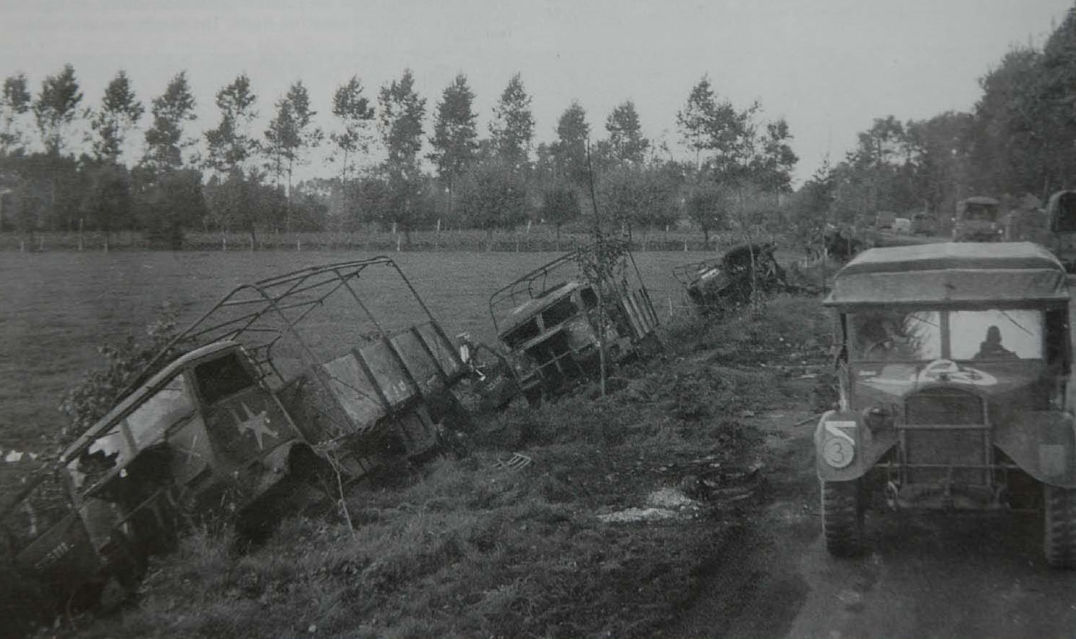 Destroyed vehicles along the Corridor

Monday September 25th, 1944
To delay the Allied advance even more, the Germans tried to destroy the canal bridge at Veghel. Nothing came of this, because they were attacked from all sides by the Americans and British. All day there was fighting at Logtenburg. By nightfall, the Corridor had been recaptured, but the Germans were still in the area.
Because they were almost surrounded, the Germans could do nothing but retreat. They succeeded in escaping at night and were even able to take their 88 mm guns with them to Schijndel. 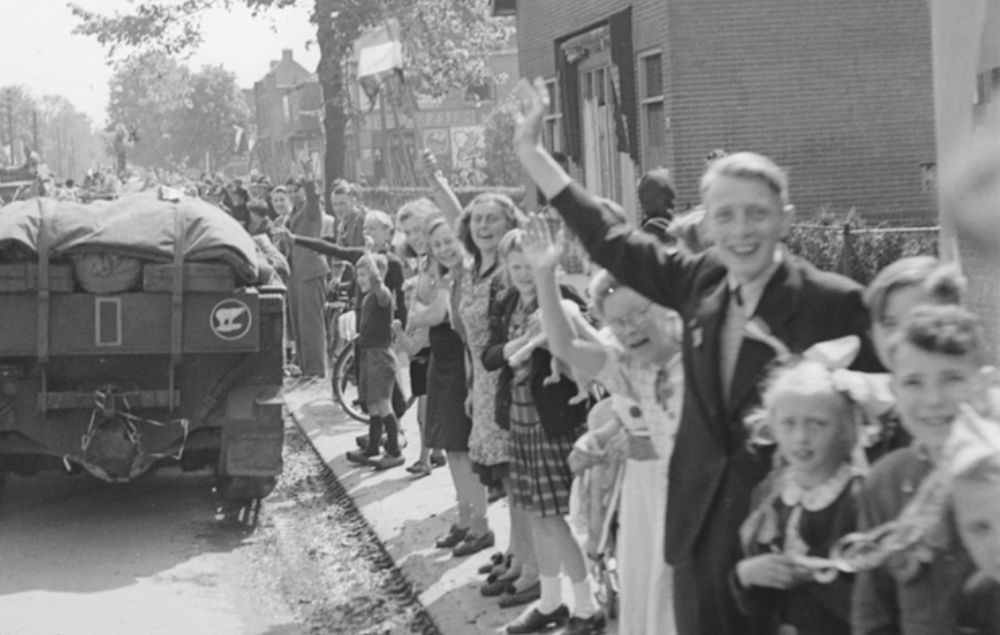 Tuesday September 26th, 1944
The Allies were fed up with the German attacks and decided to eliminate them for good. The Germans had taken refuge in the area between Schijndel, Eerde and Sint-Oedenrode. They had suffered many losses and were quite simply overpowered by the Americans and British. The group that had managed to escape to Schijndel could do little harm. After the mines, placed by the Germans, had been cleared, the Corridor was open again.
However, it was too late for the British troops in Arnhem. The purpose of Operation Market Garden had not been achieved, but the villages along the Corridor were liberated.
British troops took over the positions from the Americans and liberated the surrounding towns from here.

This site was started with Mobirise templates