Early September 1944, France and Belgium had already been liberated. To end the war quickly, Field Marshal Montgomery came up with the plan to move to Arnhem via North Brabant. From there, the Allies would take the Ruhr area and advance to Berlin. They would bypass the Siegfried Line and also isolate the German troops in the Netherlands. After some hesitation, American General Eisenhower agreed to the plan, code-named Market Garden. 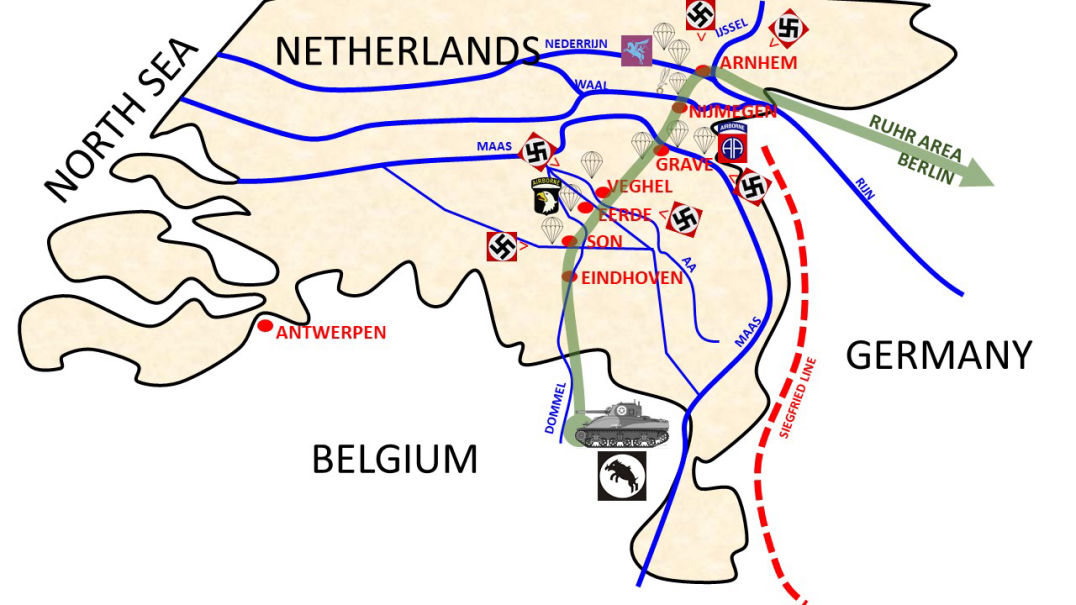 During this surprise attack, the British 30th Army Corps had to advance from Belgium to Arnhem (Garden) in two days. The road to Arnhem was captured by the American 101st and 82nd Airborne Division (Market). They had to seize the bridges and keep the corridor open for the advancing troops . The British 1st Airborne Division and the Polish 1st Parachute Brigade landed near Arnhem.
The operation started on September 17, 1944. The first day was quite successful and almost all bridges were captured that day.
The Germans managed to cut off the corridor several times. Due to the fierce battles that were fought, the road was nicknamed "Hell's Highway". The Germans succeeded in slowing down the British tanks so badly that the plan ultimately failed.
The troops that had landed at Arnhem became trapped between the Rhine and the Waal river and suffered great losses before they could withdraw. The south of the Netherlands was liberated, but the north of our country suffered a terrible winter in which tousands of civilians died of starvation.
The war would continue until May 1945.